USP: Call for Papers for an International Conference entitled: "The Jewish Communities of Latin America" (3-6 September, 2012) 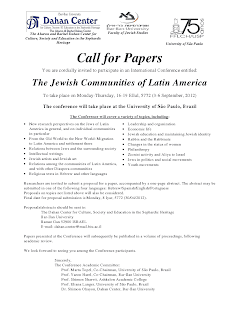 You are cordially invited to participate in an International Conference entitled:

The Jewish Communities of Latin America

The conference will take place at the University of São Paulo, Brazil

The Conference will cover a variety of topics, including:

Researchers are invited to submit a proposal for a paper, accompanied by a one-page abstract. The abstract may be submitted in one of the following four languages: Hebrew/Spanish/English/Portuguese

Proposals/abstracts should be sent to:

The Dahan Center for Culture, Society and Education in the Sephardic Heritage

Papers presented at the Conference will subsequently be published in a volume of proceedings, following academic review.

We look forward to seeing you among the Conference participants.